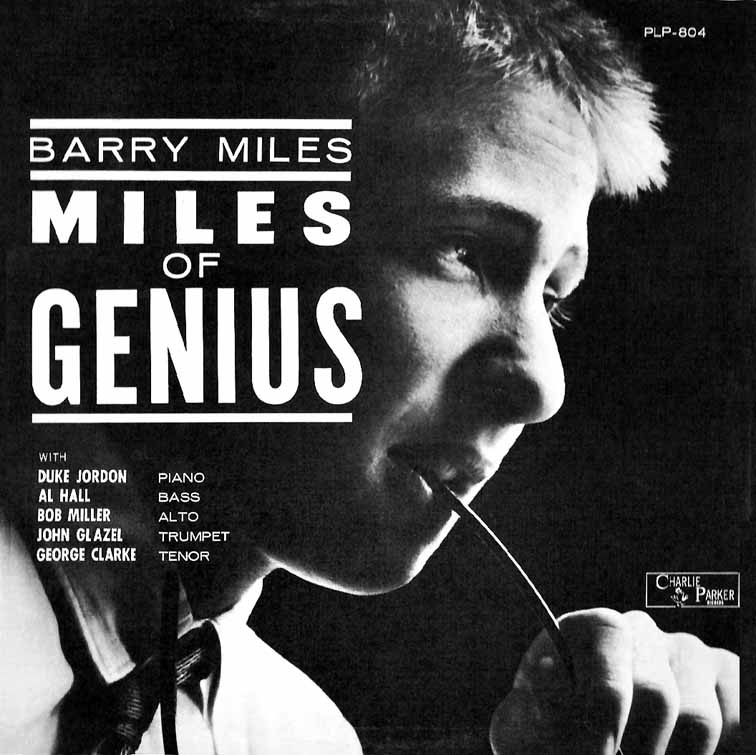 COMPOSED and ARRANGED by BARRY MILES

It is not normally my function to write liner notes. As you probably know, my life' activity has been devoted to playing my instrument, surrounding myself with the finest musicians available and conducting my herd. Through the years, I have had the good fortune to have sent many great artists from my bands onto stardom of their own, and that has always given me a great satisfaction. When I was asked to write these notes, however, I was really happy to do so, for in my own small way I feel that I am at least partly responsible for the discovery of perhaps the most unusual artist I've come across.

When Barry Miles was since years old, he was added to a concert that the Herman Herd was performing at Linden, N.J., mainly as a "gimmick" attraction and as a favor to some local residents. However, after hearing him play vibes, piano, and drums (he knocked me out with his conception and his time on fours, etc.), though embryonic in his technique and fluency, I recognized that here was jazzdom's true child prodigy --- and to this day, I know of no other that can approach the talent I saw in him.

My confidence in him was not in vain, for as I directed him from one milestone to another, he worked and worked hard at improving and developing through twenty major television shows; being the youngest member of the AF of M; a concert at Town Hall, N.Y. with his own adult group; to the point where he is now leading his own group on this album.

The men on this album are great musicians, but Barry Miles is a genius and now only five years after I first heard him, he is playing at least on a level equal to the greatest drummers in the business. Listen for yourself!

Barry Miles wrote all the tunes on this album. Their originality, maturity and tastefulness will scare any jazz listener and a few classical listeners, too.

In speaking to me, many times, Barry has said, in discussing and criticizing his own playing and writing; "Age has nothing to do with talent. You either play well or you don't, whether you're one or one hundred years old." So Barry proves there is no "gimmick" here, for he plays GOOD.

I hope the critics, in reviewing this record, forget that Barry is only fourteen, and aren't wont to prejudge and say, "well it really can't be as good as it sounds, after all he's only a kid". When they listen to and enjoy this album, as I know they and the public will, I hope they say, "Here is a great artist writing some excellent things and playing fantastic drums". For if they are broad enough to report in such a manner, they will be doing America's great art form, improvisational music, a great service. For I firmly believe the future of this art form lies in the hands of such talents as Barry Miles.

In closing, let me say that it is to the credit of Aubrey Mayhew and Doris Parker of the Charlie Parker Record Co. for investing their confidence in this great talent, America's Jazz Future.