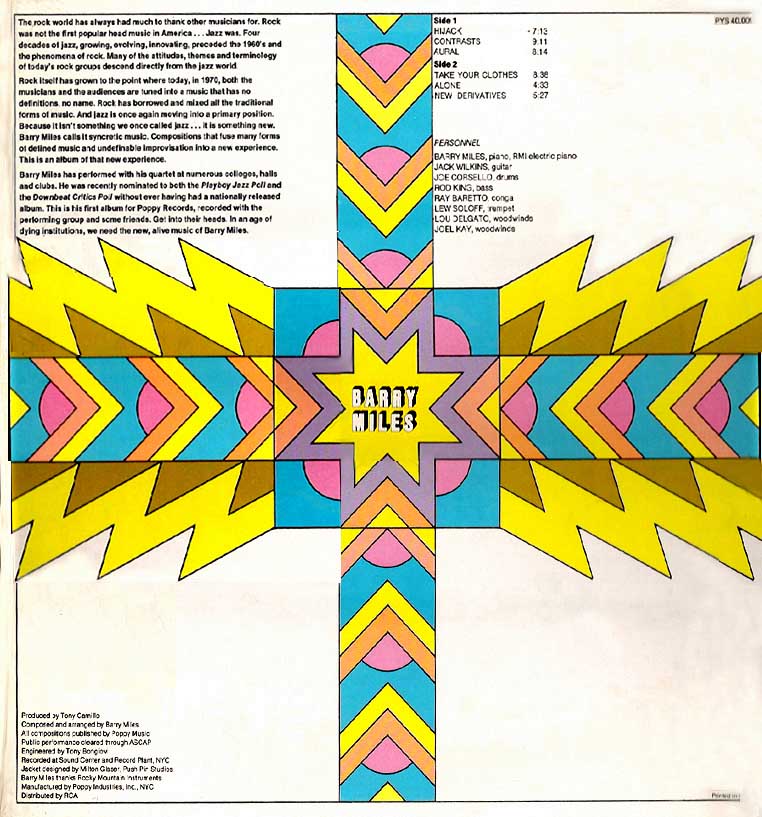 Composed and arranged by Barry Miles

The rock world has always had much to thank other musicians for. Rock was not the first popular head music in America . . . Jazz was. Four decades of jazz, growing, evolving, innovating, preceded the 1960's and the phenomena of rock. Many of the attitudes, themes and terminology of today's rock groups descend directly from the jazz world.

Rock itself has grown to the point where today, in 1970, both the musicians and the audiences are tuned into a music that has no definitions, no name. Rock has borrowed and mixed all the traditional forms of music. And jazz is once again moving into a primary position. Because it isn't something we once called jazz . . . it is something new. Barry Miles calls it syncretic music. Compositions that fuse many forms of defined music and indefinable improvisation into a new experience. This is an album of that new experience.

Barry Miles has performed with his quartet at numerous colleges, halls and clubs. He was recently nominated to both the Playboy Jazz Poll and the Downbeat Critics Poll without ever having a nationally released album. This is his first album for Poppy Records, recorded with the performing group and some friends. Get into their heads. In an age of dying institutions, we need the new, alive music of Barry Miles.